« If we fail to act, we are looking at an almost unthinkable scenario where antibiotics no longer work and we are cast back into the dark ages of medicine » – David Cameron, former UK Prime Minister

Hundreds of millions of lives are at stake. The WHO has made antibiotic resistance its number one global priority, showing that antibiotic resistance could lead to more than 100 million deaths per year by 2050, and that it already causes around 700,000 deaths per year, including 33,000 in Europe. Among the various therapeutic strategies that can be implemented, there is the use of bacteriophages, an old and neglected alternative approach that Artificial Intelligence could bring it back. Explanations.

Strategies that can be put in place to fight antibiotic resistance

The first pillar of the fight against antibiotic resistance is the indispensable public health actions and recommendations aimed at reducing the overall use of antibiotics. For example :

The second pillar of the fight is innovative therapeutic strategies, to combat multi-drug resistant bacterial strains against which conventional antibiotics are powerless. We can mention :

Each of the proposed strategies – therapeutic or public health – can be implemented and their effect increased tenfold with the help of technology. One of the most original uses of Artificial Intelligence concerns the automation of the design of new bacteriophages.

Bacteriophages are capsid viruses that only infect bacteria. They are naturally distributed throughout the biosphere and their genetic material can be DNA, in the vast majority of cases, or RNA. Their discovery is not recent and their therapeutic use has a long history, in fact, they started to be used as early as the 1920s in Human and Animal medicine. Their use was gradually abandoned in Western countries, mainly because of the ease of use of antibiotics and the fact that relatively few clinical trials were conducted on phages, their use being essentially based on empiricism. In other countries of the world, such as Russia and the former USSR, the culture of using phages in human and animal health has remained very strong: they are often available without prescription and used as a first-line treatment. 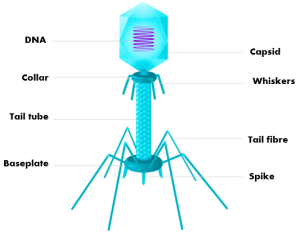 The mechanism of bacterial destruction by lytic bacteriophages

There are two main types of bacteriophages:

The diagram below shows the life cycle of a lytic phage:

This is what makes lytic phages so powerful, they are in a “host-parasite” relationship with bacteria, they need to infect and destroy them in order to multiply. Thus, the evolution of bacteria will select mainly resistant strains, as in the case of antibiotic resistance, however, unlike antibiotics, which do not evolve – or rather “evolve” slowly, in step with the scientific discoveries of the human species – phages will also be able to adapt in order to survive and continue to infect bacteria, in a kind of evolutionary race between the bacteria and the phages.

The possible use of Artificial Intelligence

One of the particularities of phages is that, unlike some broad-spectrum antibiotics, they are usually very specific to a bacterial strain. . Thus, when one wishes to create or find appropriate phages for a patient, a complex and often relatively long process must be followed, even though a race against time is usually engaged for the survival of the patient: the bacteria must be identified, which implies sample cultivation from the patient, characterizing the bacterial genome and then determining which phage will be the most likely to fight the infection. Until recently, this stage was an iterative process of in-vivo testing, which was very time-consuming, but as Greg Merril, CEO of the start-up Adaptive Phage Therapeutics (a company which is developing a phage selection algorithm based on bacterial genomes), points out: “When a patient is severely affected by an infection, every minute is important.”

Indeed, to make phage therapy applicable on a very large scale, it is necessary to determine quickly and at a lower cost which phage will be the most effective. This is what the combination of two technologies already allows and will increasingly allow: high frequency sequencing and machine learning. The latter makes it possible to process the masses of data generated by genetic sequencing (the genome of the bacteriophage or the bacterial strain) and to detect patterns in relation to an experimental database indicating that a phage with a genome X was effective against a bacterium with a genome Y.  The algorithm is then able to determine the chances of success of a whole library of phages on a given bacterium and determine which will be the best without performing long iterative tests. As with every test-and-learn domain, phage selection can be automated.

In addition to the determination of the best host for a given bacteriophage (and vice versa) discussed below, the main use cases described for artificial intelligence in the use of phages are

It is also possible, as illustrated in the diagram below, for rare and particularly resistant bacteria, to combine the techniques seen above with synthetic biology and bio-engineering techniques in order to rapidly create “tailor-made” phages. In this particular use case, Artificial Intelligence offersits full potential in the development of an ultra-personalised medicine. 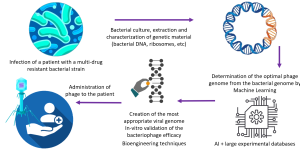 Despite its usefulness, phage therapy is still complicated to implement in many Western countries. In France, this therapy is possible within the framework of a Temporary Authorisation for Use under the conditions that the patient’s life is engaged or that his functional prognosis is threatened, that the patient is in a therapeutic impasse and that he or she is the subject of a mono-microbial infection. The use of the therapy must also be validated by a Temporary Specialised Scientific Committee on Phagotherapy of the ANSM and a phagogram – an in vitro test that studies the sensitivity of a bacterial strain to bacteriophages, in the manner of antibiograms – must be presented before treatment is started. Faced with these multiple difficulties, many patient associations are mobilizing to campaign for simplified access to phagotherapy. With the help of Artificial Intelligence, more and more phagotherapies can be developed, as illustrated in this article, and given the urgency and scale of the problem of antibiotic resistance, it is essential to prepare the regulatory framework within which patients will be able to access the various alternative treatments, including bacteriophages. The battle is not yet lost, and Artificial Intelligence will be a main key ally. 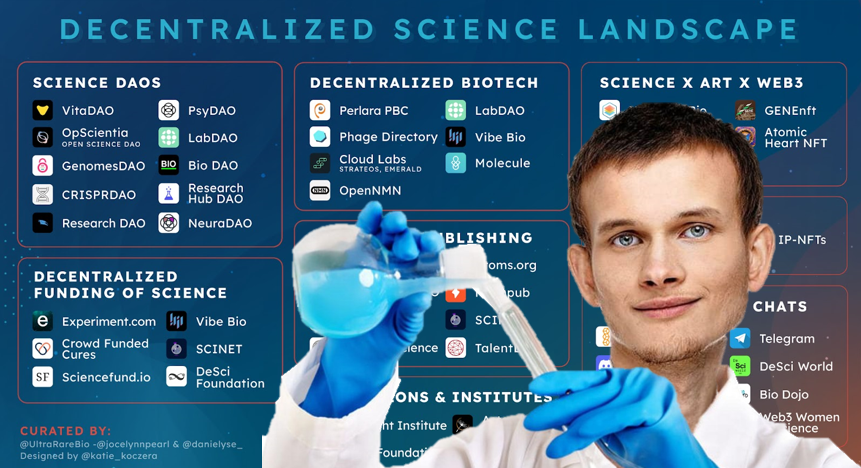 Alexandre Demailly 3 May 2022
Questions asked by Alexandre Demailly We thank Mr Christophe Baron for his time and answers and wish Louis App a long life! To discover the app: https://www.louisapp.io/ 1] Could you… 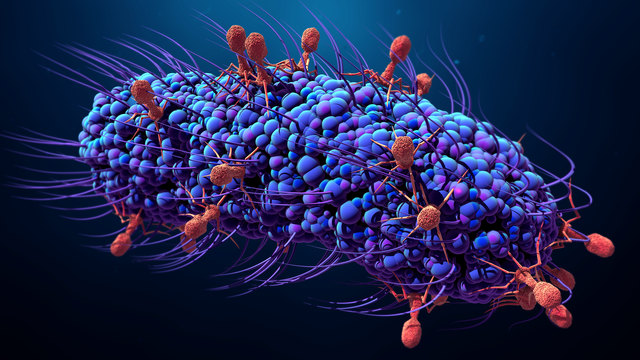 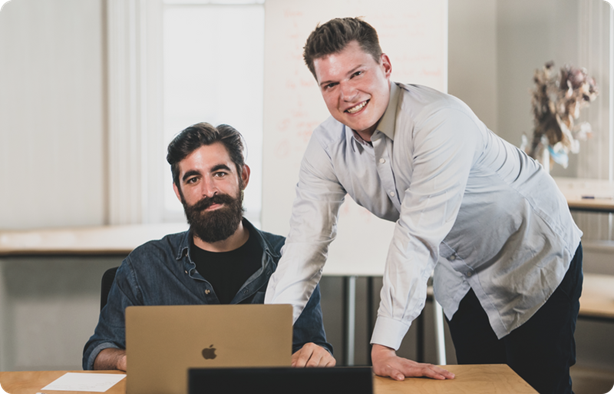 Pharmacist graduated from Lille University, France, Alexandre pursued his studies in Medical Economics at the Paris-Dauphine University and developed his knowledge of Artificial Intelligence in Health at the University of Paris.
Passionate about health innovation and entrepreneurship, Alexandre is currently involved in two early stage biotechs in the neurodegenerative diseases field.